You Receive a Subpoena For a Client’s File – What Do You Do?

“This article aims to give an attorney guidance on how to meet their ethical obligations.” Read more in “You Receive a Subpoena For a Client’s File – What Do You Do?” written by John M. Naylor of Naylor & Braster (COMMUNIQUÉ, June/July 2022)

Note: This is an extract from CCBA’s CLE Article #12.*

Every attorney accumulates old client files—you store them in the very back of the file room or as an archived file on the cloud, and they may or may not be able to easily find. You forget about them until it comes time to clean up the file room, make more space on the cloud, or someone serves a subpoena for them. What do you do when someone subpoenas the files of an existing or long-forgotten client? Basically, you should fight it. This article aims to give an attorney guidance on how to meet their ethical obligations.

Whose files are they anyway?

The State Bar of Nevada considers the files in your possession to be the property of the client. See State Bar of Nev., Standing Comm. on Ethics & Professional Responsibility, Formal Op. No. 28 (Sept. 24, 2007) (Answer to Question No. 1). You have an ethical duty under NRPC 1.15(a) to keep those files for seven years, after which point, you may dispose of them. Attorneys should remember that files need to be destroyed in such a way as to protect client confidences. See, e.g., State Bar of Texas, Professional Ethics Comm., Op. No. 627 (Aug. 2013). That means that throwing them in the dumpster behind your office is insufficient, but the finer points of document destruction are a topic for another day. You and your client can shorten the seven years by agreement so long as the period is reasonable and does not otherwise violate the client’s rights. See Nev. Formal Op. No. 28, (Answer to Question 4). The State Bar of Nevada suggests that two years is the minimum, but that may be longer for certain types of files. How long to keep files is beyond the scope of this article, but a useful publication that covers this topic is the State Bar of Nevada’s “Succession Planning in Nevada,” published in 2017 and available for free on the state bar’s website under the News and Publications tab). What this all means is that a subpoena for a client’s file is essentially a subpoena for a client’s property.

NRCP 1.6 imposes duties on you

Nevada Rules of Professional Conduct 1.6(a), which is based on ABA Model Rule 1.6 is the primary rule at play here. Rule 1.6 generally prohibits an attorney from disclosing any information regarding the representation of a client unless one of several exceptions apply. The State Bar of Nevada has wholeheartedly embraced this prohibition by broadly stating that an attorney cannot disclose anything regarding a client or the representation. See State Bar of Nev., Standing Comm. on Ethics & Professional Responsibility, Formal Op. No. 41 (June 24, 2009). Here, anything means everything. A literal reading of Formal Opinion No. 41 prohibits an attorney from confirming the identity of a client, even if that information is a matter of public record (i.e., even if you have just made an appearance in court).

The applicable exemption here is NRPC 1.6(b)(6), which allows a lawyer to disclose information when necessary to comply with a law or a court order. An argument can be made that a validly issued subpoena is a court order for purposes of NRPC 1.6(b)(6) since it is technically issued by a court and the served party is subject to possible contempt for noncompliance. See NRCP 45(a)(2), 45(e). No Nevada cases or other authority discuss the implications of a subpoena for client files, and Formal Opinion 41, while broad in scope, does not really discuss the exceptions.

Do the comments to the ABA Model Rules offer any help? While the Supreme Court of Nevada did not adopt the comments, they may be used as guidance. NRPC 1.0A. The ABA commentary, though, expressly states that whether a particular order fits within the exception of NRCP 1.6(b)(6) is beyond the scope of the rules. See ABA Model Rule 1.6(B)(6) (2015) (Comment 12. So, what do you do?

Nevada has no specific authority regarding the subpoenaing of client files. As a general principle, the Supreme Court of Nevada and the State Bar of Nevada will at least consider the ethic opinions of other jurisdictions and the American Bar Association. See, e.g., Merits Incentives, LLC v. Eight Judicial District Court, 127 Nev. 689, 262 P.3d 720 (2011); Nev. State Bar Formal Op. No. 18 (Apr. 29, 1994).

The ABA looked at this issue in 1994 and again in 2016. See ABA Formal Op. 94-385 (June 5, 1994), ABA Formal Op. 473 (Feb. 17, 2016). The reason for the fresh look in 2016 was the adoption of ABA Model Rule 1.6(b)(6) in 2002. Prior to the amendment, Model Rule 1.6 was interpreted to allow disclosure of client files to comply with a final order of a court. ABA Model Rule 1.6 (1994) (Comment 20). The ABA eliminated any reference to final orders by amending Model Rule 1.6(b) to allow disclosure in response to simply just orders. Nevada adopted the amended Rule 1.6 in 2006. The amendment raised questions about court orders that the ABA formal opinion attempts to address. A more detailed discussion of this amendment and its reasoning appear in ABA Formal Opinion 473. Unless another source is cited, the following approach to a subpoena is described in ABA Formal Opinion 473.

Can you find the client?

The initial question a lawyer faces is whether they can find the client because the first duty upon receiving a subpoena is notification. For an existing client, notification should be easy.

After notification, you must consult the client and that consultation must include, at a minimum, (i) a description of the protections afforded by NRPC 1.6(a) and (b); (ii) to what extent the attorney-client privilege or work product doctrines apply to the subpoenaed material; and (iii) any other relevant matters. See ABA Formal Op. 473, NRPC 1.4. Other relevant matters could include whether disclosure of the material may raise concerns of criminal liability or whether the subpoena is valid in the first place. Id..

If after consultation the client makes a fully informed decision to not fight the subpoena, the lawyer may proceed with disclosure. If the client wants to fight the subpoena, the lawyer must use all reasonable means to do so. The starting point for that is NRCP 45, which governs the issuance of subpoenas and lays out a procedure for objecting to them. Most objections will be grounded in the attorney-client privilege and work product doctrines. The nuances of the objections will most likely be fact specific and are beyond the scope of this article.

If the client and attorney agree on objections, they will typically be asserted by a Rule 45 Letter that identifies the reasons for withholding documents. See NRCP 45(c)(2)(B). The subpoenaing party will then bring a motion to compel. See NRCP 45(c)(2)(B)(ii). At that point, the court will rule. If the ruling is not to the client’s liking, NRPC 1.4 requires the attorney to discuss the possibility of appeal with the client.

Two issues may come up after consultation. The first is when the lawyer and client do not agree on what objections to make or whether to proceed with the appeal of an adverse ruling. The second issue is more likely to come up and that is when the attorney and client cannot agree on the cost of opposing the subpoena. The latter is especially true if defending against a subpoena falls outside the original scope of the engagement.

If there is a disagreement over the scope of the objections or the fees, the lawyer may have to withdraw from representing the current client or decline to renew the engagement with a former client. In either event, the lawyer must give the client a reasonable time to find counsel.

What happens if the client or former client cannot or will not find new counsel? ABA Formal Opinion 473 is not clear on this situation. It does suggest, however, that the attorney must still have to take reasonable steps to oppose the subpoena. See ABA Formal Op. 473 fn. 21, citing D.C. Bar Op. 288 fn. 4 (1999). As described below, in the situation where a lawyer cannot find a former client, this will most likely include objecting to a subpoena and responding to a motion to compel, but does not require the pursuit of an appeal.

And if you can’t find the former client

In the case of a former client that cannot be located, the attorney must take reasonable steps to locate them. NRPC 1.0(h) defines reasonable as the actions that a prudent and competent lawyer would take. ABA Opinion 473 advises that these steps include internet searches, faxes, calls, e-mails, and a letter to the former client’s last known address. The lawyer should keep a record of all attempts to reach the former client.

If you cannot find your client, ABA Formal Opinion 473 requires the attorney to still make all reasonable objections to protect privileged material. The opinion advises that the lawyer, when making the objections (and presumably in response to a motion to compel), candidly explain to the court all the steps taken to locate the former client. If the court orders disclosure, the attorney may do so pursuant to NRPC 1.6(b)(6).

Importantly, ABA Formal Opinion 473 does not require the lawyer to pursue an appeal on behalf of an unavailable or unlocatable client. The opinion employs a balancing of hardships analysis to determine that the interests in protecting the unavailable client’s interests outweigh the burden on the lawyer to object to the subpoena and respond to a motion to compel. Once a court has ruled in favor of disclosure though, the balance shifts in favor of the lawyer due to the burden of pursuing an appeal. Therefore, under ABA Formal Opinion 473, the lawyer is not ethically bound to pursue an appeal on behalf of an unavailable client and may safely produce the file under NRPC 1.6(b)(6).

What if my client has died?

What the ethical opinions and the rules make clear is that a subpoena alone is insufficient to require you to turn over a client’s file, regardless of whether it is considered a court order. Unless the client gives informed consent to release the file, the attorney is duty bound to fight it, at least up until the point a court or other tribunal enters an order specifically requiring its production.

About this article: This article was originally published in the Communiqué, the official publication of the Clark County Bar Association, (June/July 2022). See https://clarkcountybar.org/member-benefits/communique-2022/communique-june-july-2022/.

*About the CCBA’s Article #12: “You Receive a Subpoena For a Client’s File – What Do You Do?” offers 1.0 Ethics Continuing Legal Education (CLE) Credit to Nevada lawyers who complete the test and order form per the offer described in the June/July 2022 issue of Communiqué. See pp. 20 and 22-28. The CCBA is an Accredited Provider with the NV CLE Board.

John M. Naylor, Esq. has been licensed for nearly 35 years and is a cofounder of Naylor & Braster, a Las Vegas law firm specializing in business litigation. He practices in the areas of commercial litigation, appellate work, and construction law.

“Someone Subpoenas Your Client Files – What Do You Do Next?”

A CLE program for Nevada lawyers

Learn more about this CLE program for CCBA members… 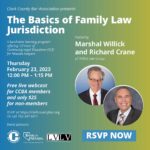